e-RUPI: Digital currency for the masses 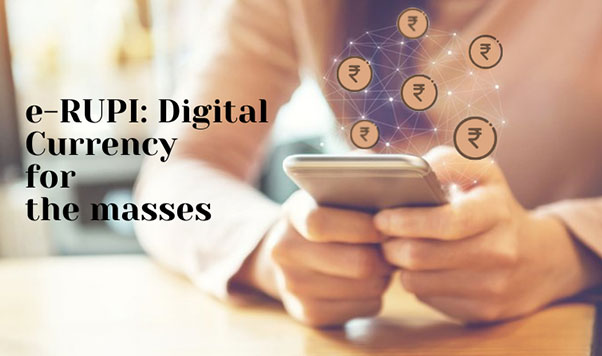 On 2nd August 2021, the Prime Minister of India, Narendra Modi launched the e-RUPI - a cashless and contactless voucher-based digital payment solution, via video conferencing. Given the problems of leakage, visibility and delivery of welfare payments in the system, the e-RUPI vouchers are seen as an answer in making Direct Benefit Transfer (DBT) schemes more effective.

The e-RUPI, India’s digital voucher programme was launched in August as a tool to change the way transactions take place in India and to take care of payments for a range of government services. Boosting the country’s growing fintech sector, it can be used by the private sector also for making payments to employees. The e-RUPI which is a person-specific and purpose-specific payments system is developed by the National Payments Corporation of India (NPCI) assisted by the Department of Financial Services, Ministry of Health and Family Welfare, and the National Health Authority.

The introduction of e-RUPI is seen as a giant move towards financial inclusion and has been welcomed enthusiastically by cryptocurrency enthusiasts. The primary goal and long-term ambition of e-RUPI are to reach and connect 190 million unbanked individuals and bring them into the official financial system, therefore closing a portion of the digital divide in India. Our country's digital payment system has the potential to give equitable access to economic, healthcare, and social services to each and every member of our nation.

Understanding the e-Rupi and how it works

The e-RUPI is a pre-paid e-voucher, which can be used for specified government services. It is an SMS string or QR code-based e-voucher which is delivered to the intended beneficiary’s mobile phone. The e-Rupi can be used by anyone with a basic feature phone and does not require the beneficiary to have a bank account. Research indicates there are close to 400 million feature phone users in India who will be greatly benefitted from the e-Rupi as they can redeem the e-Rupi voucher without a card, digital payments app, or internet banking access which require an internet-enabled smartphone.

The e-RUPI can closely track any benefit gained and ensure the money is used for the right purpose and also make the spending facility time-bound to warrant no abuse/misuse.

Any organisation wanting to donate money for a specific cause like health treatment or education of a particular person, can just provide an e-RUPI voucher instead of cash through their partner banks. They are also assured that the money is used for the purpose it was donated for. e-RUPI guarantees the money is being used for the purpose of providing assistance and benefits. The e-voucher comes to the recipient as a QR code and text message voucher, which they can redeem at specific accepting centres without any credit or debit card, mobile app or internet banking. The e-RUPI will connect the sponsors of the services with the beneficiaries and service providers digitally without any physical interface.

How vouchers will be issued

The e-Rupi system, built by NPCI on its UPI platform has onboard several banks that will be the issuing entities. Any corporate or government agency requiring vouchers will approach the partner banks with details of the receiver and the purpose for which the voucher has been issued. The receivers will be identified with their mobile number and a voucher issued by a bank will be sent by the organisation to the receiver.

Importance or significance of e-RUPI

According to experts, the e-RUPI will help India remain the world leader in digital payments. It is also likely to highlight the failings in the digital payment infrastructure effectively, which is necessary to develop future digital currencies, with the government’s CBDC (Central Bank Digital Currency) in the pipeline. The e-RUPI is different from a virtual digital currency as it is based on vouchers. But it provides the same data security and privacy that cryptocurrencies do, as there is no need for private personal information during the redeeming of vouchers.

With fintech businesses like Coinswitch Kuber being valued at over $500 million, the e-Rupi is seen as a unique initiative to deliver secured financial support to the masses, especially to people without bank accounts. The e-RUPI, in the form of a coupon, is easier to carry, especially while travelling.

The most prominent feature of an e-RUPI voucher is that it is QR code or SMS string-based and is a one-time, contact less and cashless digital payments system, connecting service sponsors and receivers digitally and guaranteeing availability and delivery of different welfare services.

How e-RUPI will make a difference to millions

The e-RUPI, if successfully implemented could help in forming a completely digital economy that will have its own set of rules.